In my post from June 10th, I mentioned 18.90 as a key initial target for silver. This level at sub-$19 has been an importance resistance level in silver for four years, getting rejected each time except for the false breakout in September. The breakout here is meaningful. The 14-day RSI (Relative Strength Index) is still not overbought and price looks like it has some room to run. The next target is $21, which represents the 161.8 Fibonacci extensions from the February/March high/lows. 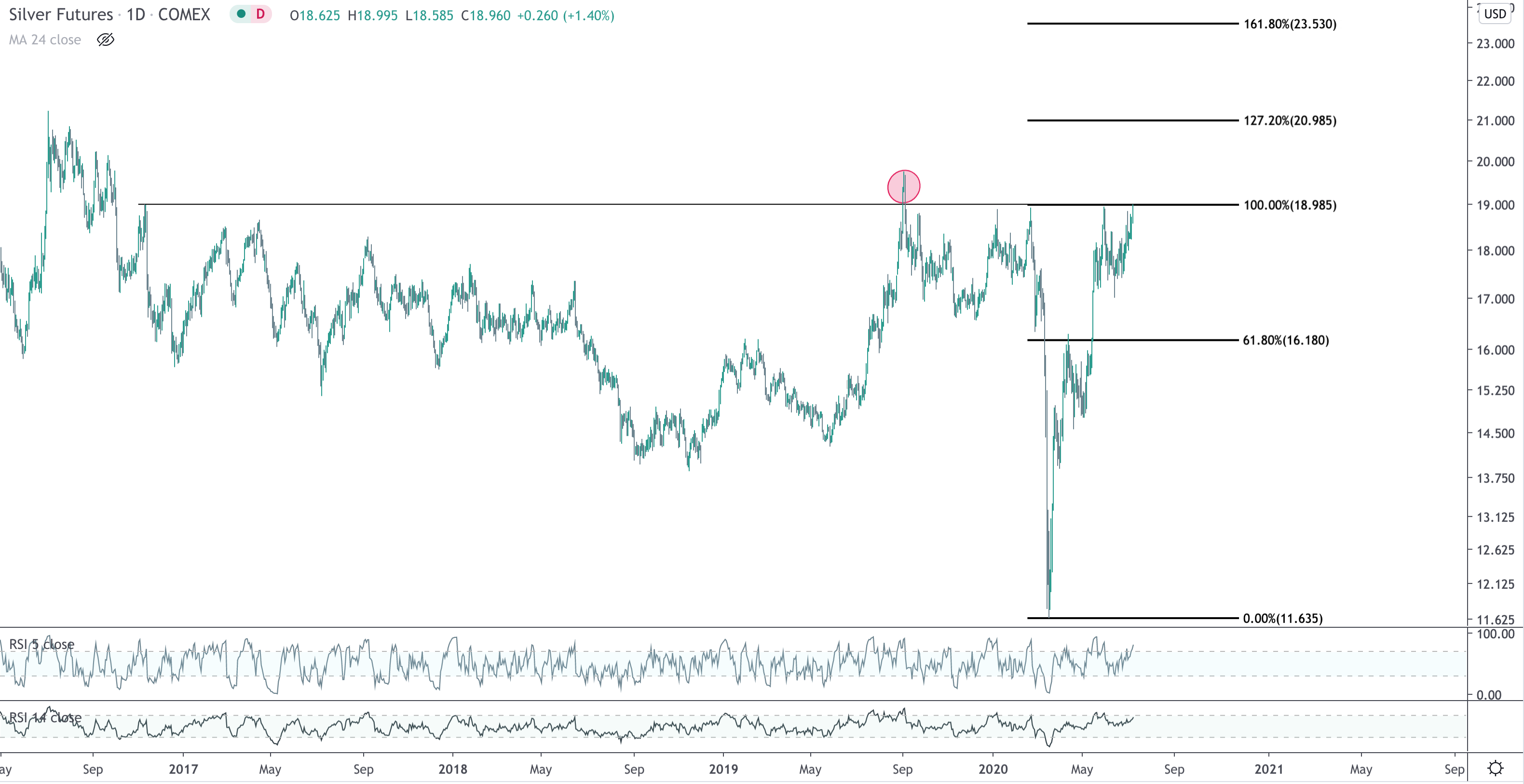 Pan American Silver (PAAS), one of the leading silver mining stocks, also broke out this morning with a gap up above the 127.2 fibonacci Extension from the February/March high/lows. This move follows a multi-week basing period and targets just under $36 on this initial thrust, which is the 161.8 fibonacci extension. 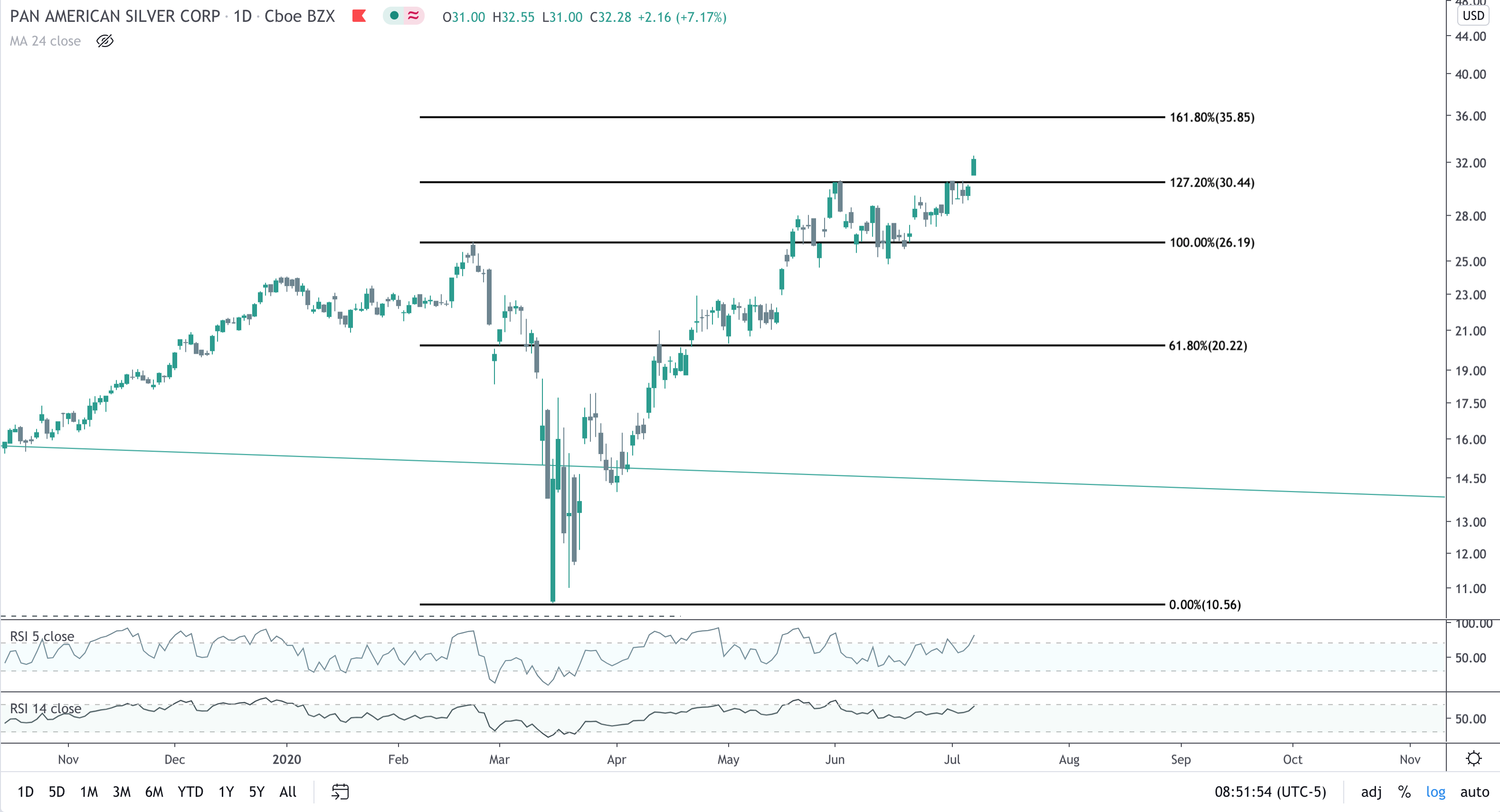 I have always viewed this $1800 price level in #gold as more significant than the $1910 blowoff top in 2011. The price level at $1800 was the multi-month, triple-tested resistance level that precipitated the 6-year base. If price holds, the breakout above this level is secular and very bullish, in my opinion, with the initial target at $2,000/ounce, or the 127.2 fib extension. 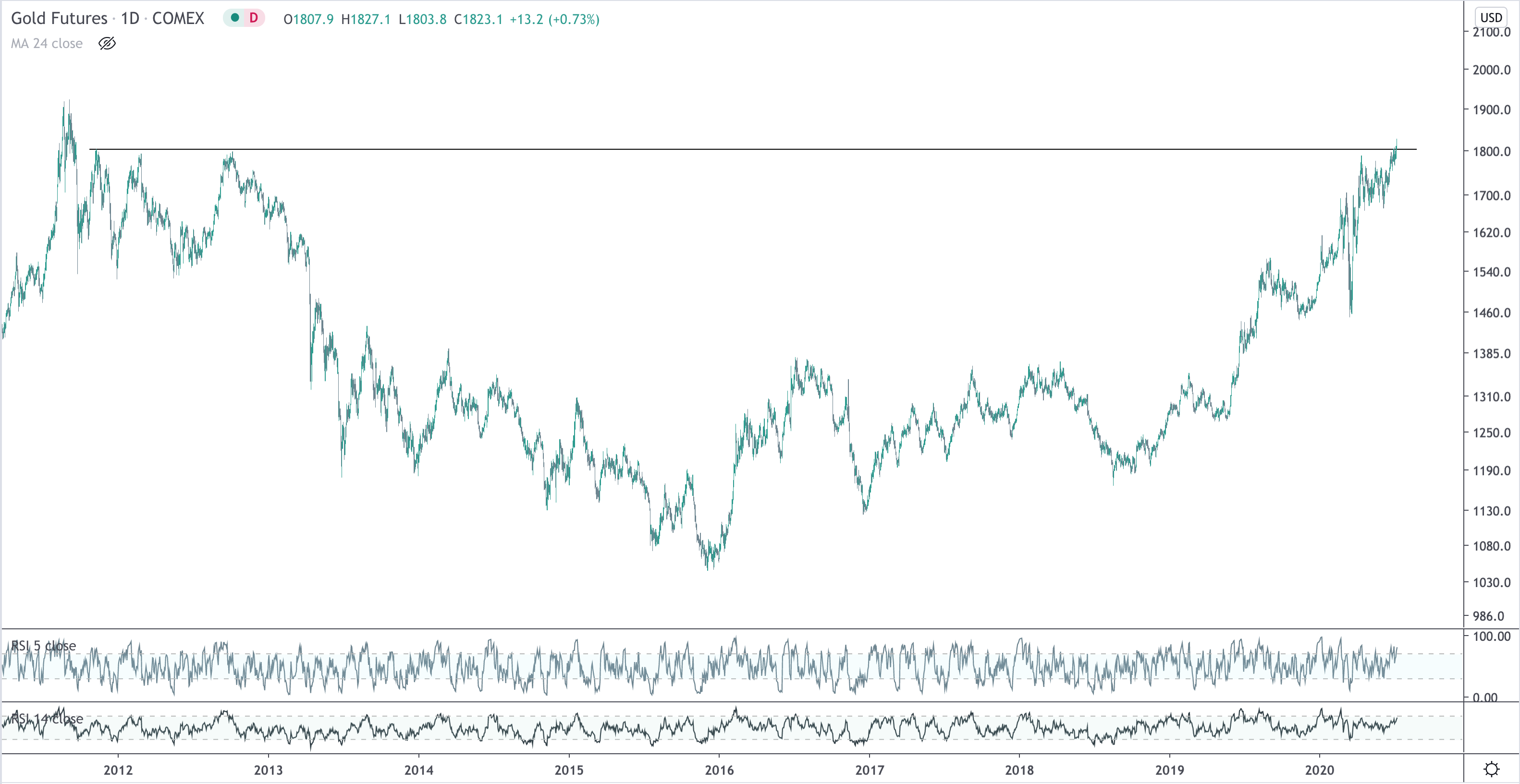 The Van Eck Gold Miners ETF had breakout and successful retest of the $32 level, broke out of the bull flag and is now taking out the May peak. My target is $42, which is the 161.8 extension from the Feb/March high/lows. 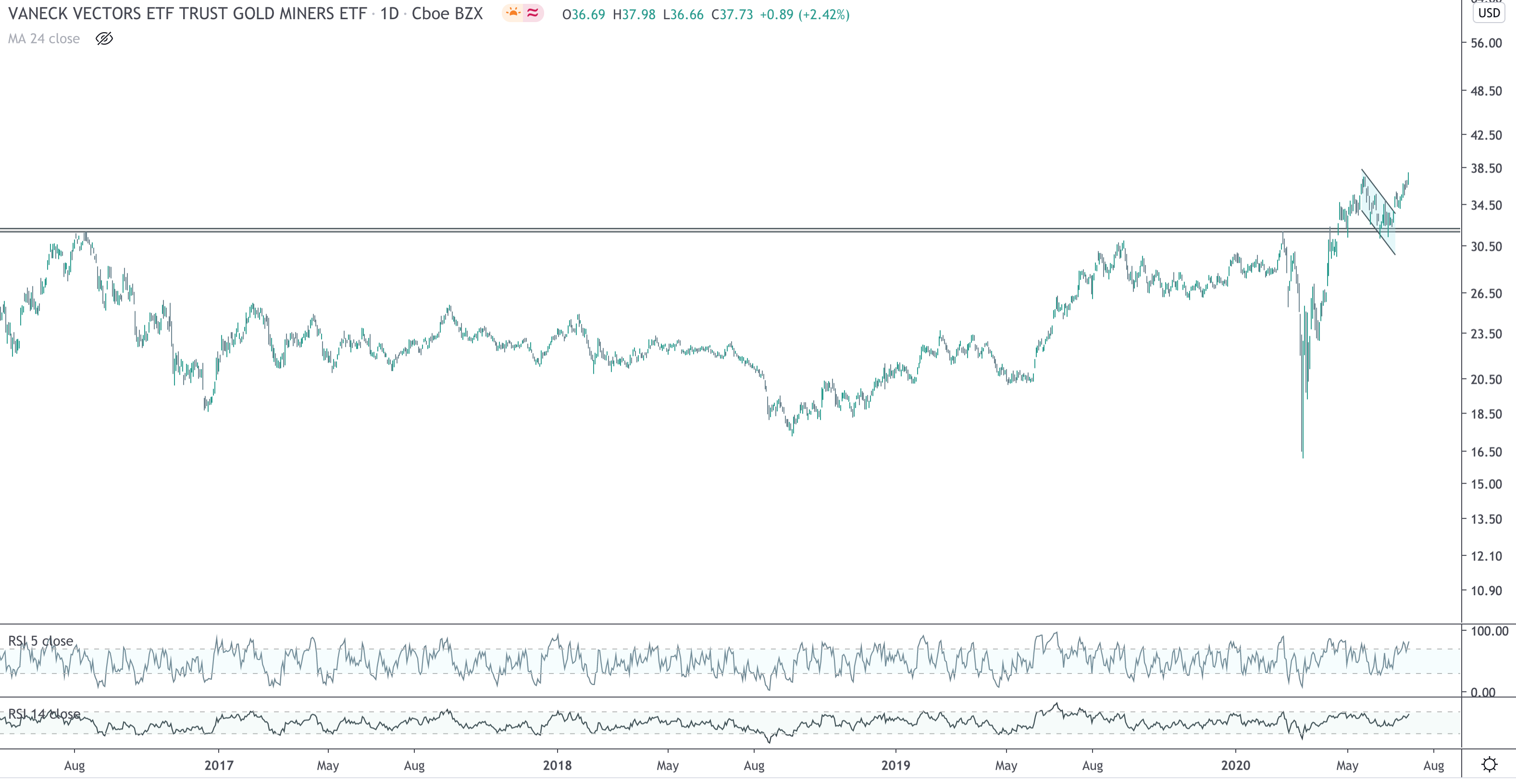 The Van Eck Junior Gold Miners ETF has been the laggard, but it is finally finally retesting the 2016 peak. Price has some room to run here and a bullish breakout/retest would be a great setup to add to long positions. The RSI hasn’t been overbought on the daily chart since July 2019. Now would be a good time to show some strength. 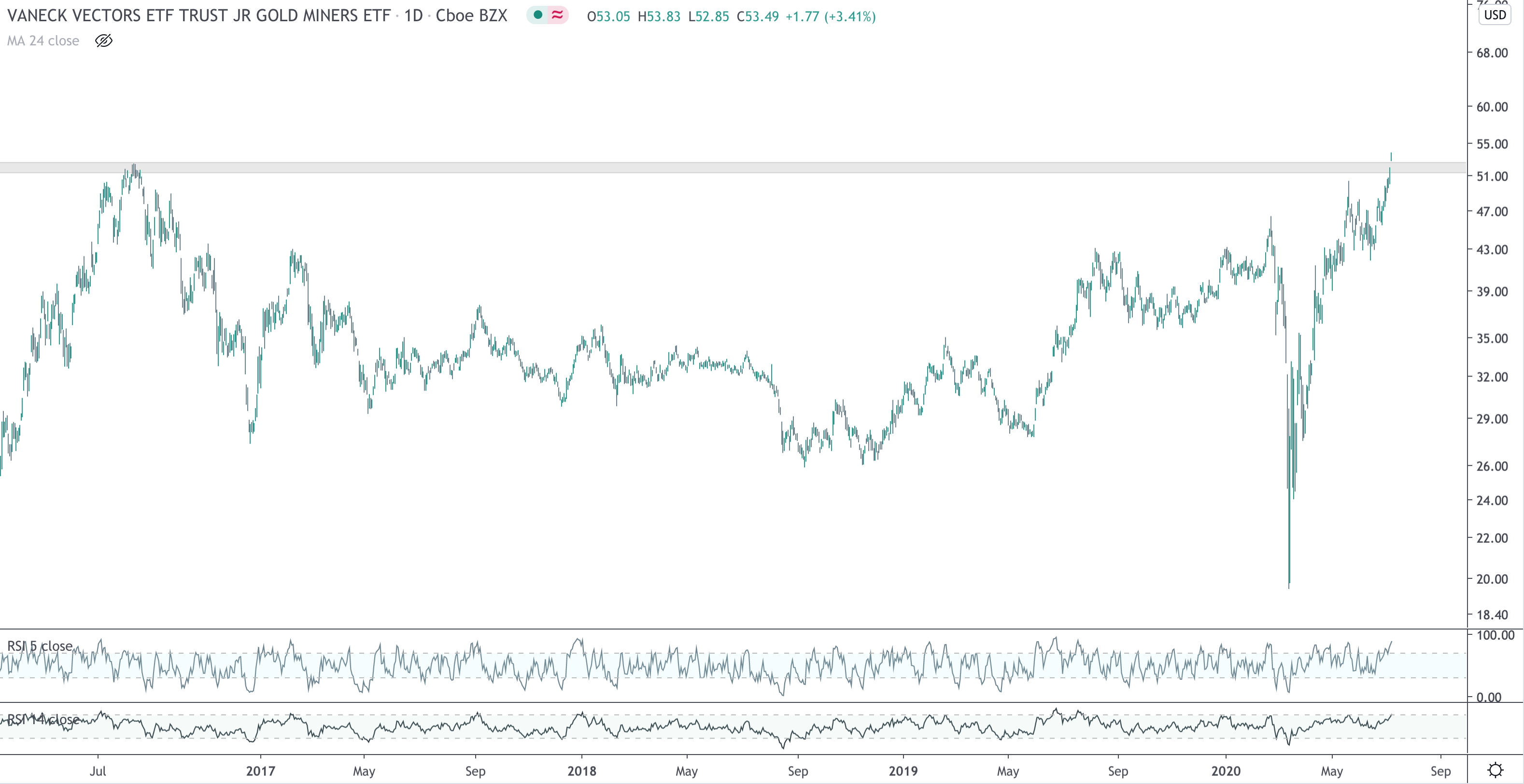